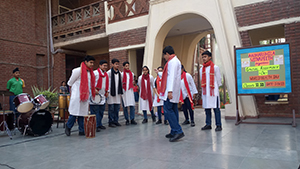 Aadharshila Vidyapeeth has always pioneered the right causes. A Special Assembly was organized on Friday,5th April,2019 for classes III-XII on the topic ‘Health For All’. A ‘NukkadNatak’ was presented on stage highlighting the importance of Fitness First. It was followed by a poem and a speech, emphasizing on the importance of Health and Personal Hygiene. The enthralled audience surely understood this above mentioned concern and would definitely follow a proper health regimen.

Aadharshila Vidyapeeth organized a Special Assembly on Aerobics Day on Wednesday, 10 April 2019 for classes Pre-School-I. The tiny tots were dressed up in their sports uniforms. They performed stretching exercises to the beat of the music in the assembly. It was a refreshing and rejuvenating experience for the blooming buds which taught them the importance of aerobics for maintaining good health.

India’s rich culture and heritage is the cynosure of the entire world. Aadharshila Vidyapeeth works ceaselessly towards this common goal with utmost gusto and grit. Monday Blues have driven away when a Special Assembly was held on 15 April 2019 to commemorate World Heritage Day. The students presented a street play on the theme of India’s colourful past and enviable heritage. A speech and poem were presented by the students of classes VI-XII. Overall, it was a day that will go down the annals of Aadharshila Vidyapeeth for a memorable time.

Aadharshila Vidyapeeth organized special assembly on ‘World Heritage Day ‘on April 18, 2019 to make the students aware about the rich heritage of India and also to make them realize their duties to keep them intact. To this students of classes, II-V presented ‘Hindi Kavita’ and students brought hang-outs of different monuments and informed facts. Students were also realized about their duties to keep this world heritage building intact by not scribbling over them and by keeping them clean.

A Special Assembly was organized on Earth Day on Monday, 22 April 2019 for classes Pre-School-I to acquaint the tiny tots about our blue planet ‘Earth’. The students were au courant with the important components of Mother Earth like water, air, land etc. The assembly acted as a medium to propagate the message of ‘Saving Earth’.

A sepical assembly on ‘Engaging English’ was organized on April 23, 2019 for II-V classes. Students presented amazing facts of English Language, importance of English language was talked about. A skit presented on the theme that the lack of knowledge of English makes us a laughing stock whereas good command over the same language makes us an impressive personality. The humor presented in the skit makes everyone laugh and also conveyed the message clearly.

The ongoing English Week reached its summit on Wednesday i.e. 24 April 2019 for classes VI-XII based on theme ‘The Infinite Use of finite Means’ was organized. A skit was presented on the occasion by the students of secondary school on the use of a single words having multifarious uses. A speech was delivered on the same. Overall, the entire week was an awe-inspiring one.

On the ongoing English Week, Aadharshila Vidyapeeth organized a special assembly on ‘William Shakespeare’ on April 25, 2019 for II-V classes. Students presented the famous play writer’s quotes in the form of thought of the day, a group song to express gratitude to give the world ‘words of wisdom’ and a scene from one of his plays ‘The Merchant of Venice’ was also enacted which really kept everyone captive and amazed .A student of class II also disguised himself as William Shakespeare and informed about his works.

The English Week observed from 22nd April 2019 to 26th April 2019 reached a high on 26 April 2019, i.e. Friday. The topic for this special assembly was Shakespeare – the Flavour of All Seasons. The assembly was organized for classes VI-XII and a discussion was presented by the students of classes XII-B. It was an impressive one too and will be remembered by one and all.