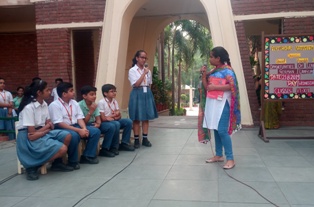 The Sanskrit language is the mother of all languages. Sanskrit is given prominence over all subjects. The Inter-House Sanskrit Shloka Competition for class – VIII to XII was conducted in the school’s auditorium on Tuesday, 20 August 2019.